A blog about our visit to the Cardiff Modulo project

The new Modulo-Beton installation at Lamby Way, Cardiff is an excellent example of how this versatile modular concrete decking system can be adapted to suit any HWRC site. Malcolm Bates went to have a look…

Wisely, Cardiff City Council decided to monitor the success of this new facility before the official opening, just to make sure everything worked as well in practice as it looked in theory. But, after spending the morning observing how residents were using the new facility – and talking to them as they left – it’s quite clear that it’s a vast improvement over the old traditional “bring site” which stands next door, awaiting demolition and redevelopment. 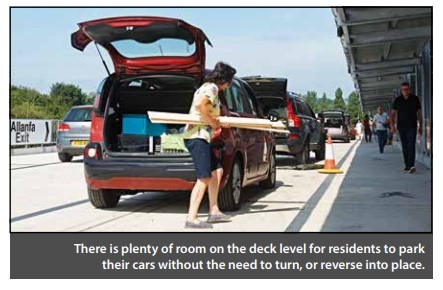 The word “installation” is the key here – the whole new facility was installed in just under three weeks on what was previously just a flat bit of land beside the entrance to a busy landfill site. The surface was given a tarmac makeover, but no groundwork was needed before the inverted U-shaped concrete blocks were unloaded from a fleet of trucks, craned into place and then bolted tight together to form a solid deck 2.6 metres above ground level. The drive-on deck level enables residents to unload their unwanted items and place them safely into a line of hooklift containers located at ground level.
Access to the upper level deck is via an inbound ramp at one end and an exit ramp at the other; the ramp incline sections are also part of the kit and, like the whole system, can be taken apart and moved – or the configuration changed – should this be necessary during the operational life of the site.
A key feature of the layout is that residents’ cars and hooklift trucks and plant are kept separate, so the whole site doesn’t have to be closed while containers are moved.

The Lamby Way site at Cardiff is the third Modulo-Beton installation in the UK to date, but it is the largest and most interesting in that it also includes a steel canopy to protect staff and residents from the elements during the unloading process. This enables the site to be used more comfortably in wet and windy weather… not a bad idea considering that Cardiff Bay is just down the road! In contrast to a rather timid approach to the concept here in the UK so far, the system is already in widespread use throughout Europe, Scandinavia and even as far away as Canada and California You’ll notice that the word “new” is only used in the context of Cardiff – the Modulo-Beton system itself is not new. It was launched in France in 2004 and I first spotted it at the Ecomondo show in Rimini something like eight years ago. So, why has it been so slow to catch on in the UK? Because it’s a “foreign” import? That can’t be it… half the RCVs we use in Britain are made in Germany. Because it’s expensive? That can’t be it either… true, while each standard modular concrete block costs around £4,000 a pop (installed) and a typical site is going to require over 100 standard blocks plus various special sections. That doesn’t sound cheap, but that’s forgetting two very important facts…

Firstly, as the 10-tonne reinforced concrete blocks are bolted together, they can be unbolted again and, should requirements change, the installation can be expanded in size… or moved entirely to another site as required. You can’t do that with a traditional construction.

And secondly? As a quick inspection at ground level under the deck confirms, a Modulo-Beton installation is literally laid out on a flat surface, bolted together and the joints exposed to the weather sealed. Job done. There is no need for any expensive excavation, or foundations of any kind… all that’s required is a flat stable surface that will take the weight.

That means a Modulo-Beton installation can be situated on a former landfill site (as in Cardiff), on reclaimed land, or brownfield sites where normal construction methods would not be feasible.

Henk Kaskens of Modulo-Beton maintains that, if required, a small rural HWRC installation could be erected in one week and be in use by the next. By using a team of company engineers (who arrive on site with all they need to do the job – except for a locally-hired mobile crane, which is pre-booked) there is a much-reduced chance  of any delay, or cost overrun as the assembly process is not so dependent on the weather. The Cardiff facility took a little longer because of the decision to fit a steel canopy, but three weeks is a massive improvement over the best part of the 12 months taken by my local council to demolish a simple flat site (which used rail-mounted compactors and steps) and build an upper deck by traditional means by pouring concrete into shuttering.

And when that was all finally finished? Well, it’s literally set in stone isn’t it? It can’t be moved, or even modified. That’s a great pity as it’s since been discovered that whoever drew-up the plans didn’t take into account of the fact that cars and SUVs have got larger in recent years. 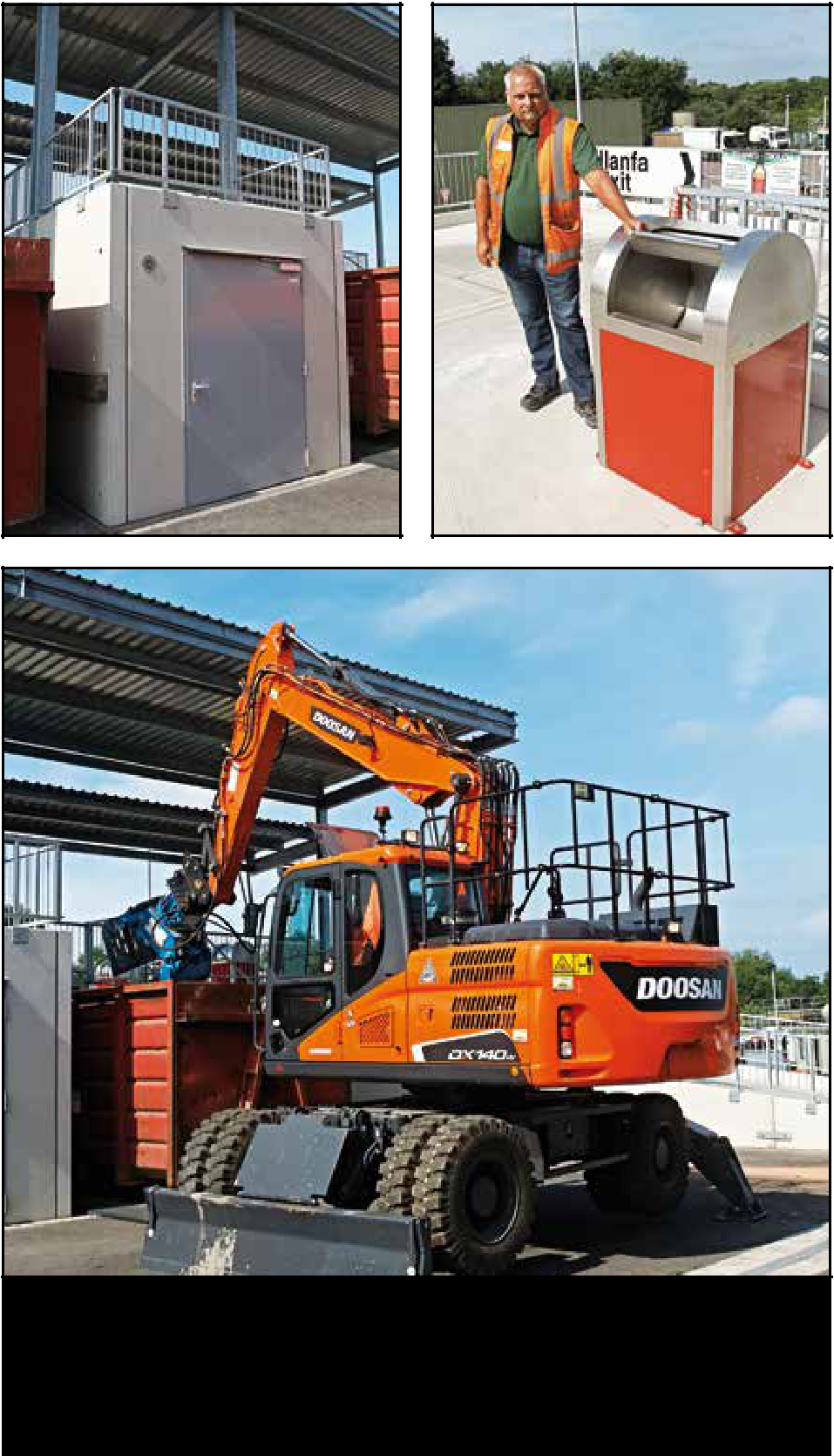 The end result? After just a few months, both inbound and outbound ramps are covered in battle scars from unfortunate residents’ cars.

But there was another issue: how were residents supposed to dispose of unwanted household items while the construction of the new facility took place on the old site?

“You’re permitted to drive anything up to 10 miles to the next nearest council site,” suggested the expensive colour brochure issued by my local council. It forgot to mention “at your own cost” and also made no apology for the fact that the remaining sites were already overcrowded. Perhaps it was no surprise that fly-tipping reached reportedly new heights during the site closure period.

A Can Do Approach

In contrast to a list of “don’ts” found at my local council site (don’t put your messy rubbish in a trailer, don’t come in a van, don’t try getting rid of more than two car tyres a year, etc), Cardiff residents visiting the new Lamby Way HWRC site have the luxury of not having to ruin the interiors of their cars when getting rid of messy unwanted materials. They’re allowed to hire a van, or bring stuff to the site on a trailer. The only proviso is that they must be Cardiff residents.

A simple ID check is considered enough to prevent abuse at this stage, but a free residents ID card is a possible option should this be found necessary to prevent what might be called “waste tourism” by residents living in other council areas.

So how does it all work? The answer is surprisingly well.

Residents enter the site from a roundabout and are guided to a control cabin, before being directed to either the upper deck or, for items such as white goods, that are not so easy to throw, to disposal stations at ground level.

There are 22 container stations covering a full range of different factions (several of each), arranged down the side of the deck. These are attended to by three staff on the

upper level and a Doosan “Wheely” with driver on the lower level to help ensure the containers are neatly loaded and compacted. At Lamby Way, the containers are located end-on to the upper level deck and the public protected by barriers but, if required, a “herringbone” layout for the hooklift containers can be specified. This has the benefit of allowing a greater loading area. The Lamby Way facility doesn’t include toilets, a site office or mess room facilities for staff, as these already exist nearby, but self-contained “modules”complete with services “plumbed- in” are also included in the product range, if required. At sites in Europe, it’s even common to find a council-run “charity shop” selling unwanted items back to the public, with the under-deck area used for storage and sorting… a great idea [and there are some becoming established here in the UK too, but agreed – a good idea – Ed.

Now let’s see… utilise a versatile, well-proven modular system that can deliver a working facility within a couple of weeks. Or take months – a year even – to demolish, excavate and construct something that will do roughly the same job, but without any secure under deck storage capability. And with far more disruption to local residents and Council Tax payers. Which sounds best? Surely, it’s a no-brainer?

Want to prevent lonq queues at your local HWRC?

Thank you for requesting our Whitepaper. Check your mail (or Spam) folder to download.